UP NEXT
New projects at Kos Airport:
Invitation to the 3rd Exclusive Exhibition for Gre:   Find your personal invitation here http://invitatio
Kos‘ “Archaeological Museum” reopened after Earthq: Kos‘ “Archaeological Museum” on Saturday 28th reopened to th
Fraport Greece briefing on Kos airport: In regards to the earthquake on Friday, 21.07.17 Fraport Gre
Information about the Museums in Kos: If you want to see Museums in Kostown we have some info for
PROGRAM OF THE 5th INTERNATIONAL WIND BAND FESTIV: During the six –day festival , the island of Kos will be flo
The Chamber of Commerce and Industry of Dodecanese: Highly successful was the presence of the The Chamber of Com
The Chamber of Commerce and Industry of Dodecanese: The Chamber of Commerce and Industry of Dodecanese participa
Travel to Nisyros 14th and 15th August with "PANAG: Those are the ship itineraries for Nisyros at 14/08/2016 and
Explore Kos through an amazing video !!!: A video shows the beauty of our island created by Dionysis M
FacebookTwitterYouTube 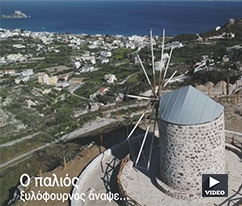 Traditional settlement "Mylotopi" is located in the village of Kefalos, Kos, about 42 km from the city of Kos and 16 km from the International Airport "Hippocrates".
In antiquity it was called "Astypalaia" and was named after either the capital of the island (until 366 BC) or the shape of the area that resembles a gyapatios head.
It is divided into two parts: in the traditional settlement located on the top of the hill and in the coastal section of Kamari, where it is the harbor of the village and according to the last census (2011) there are 2,156 permanent residents.
The settlement "Mylotopi" allows the visitor to tour 6 buildings - traditional oven, traditional house, windmill, tunnel, tunnel, traditional café / restaurant - which make up a characteristic example of the island's architecture and cultural identity area. It is worth visiting!

Fill in your address into the address field below the map and the shortest route will be calculated.